Trending
You are at:Home»Cycling»Clásica San Sebastián 2014 Preview
By gghofman on August 1, 2014 Cycling

So we are coming off a post tour hang over, we had the Tour of Wallone dominated by Meersmann who looked in top shape with the help mainly of the supreme Czech champion Stybar. The 219km Clásica San Sebastián is probably the top one day race in a declining Spanish cycling calendar (It is Spains only World Tour one day race). The race has often being seen as a race were form carried over from the Tour is rewarded. Last years winner saw quiet some success in this years tour pipping two top talents. A good kick and a tactical racer does well in this race.

The 219km features 6 climbs in all but goes over 500metres just the once early in the day. The final climb of Bordako Tontorra really can mix things up. By 4.30pm on Saturday we should know the winner and coverage has grown with Eurosport covering this race. The final climb of Bordako Tontorra is said to have some very steep pitches.  The info I have says it is 2.5km at 9%. But in the second half it has some short 20% sections of 155m and 240m which could really crack things apart. (see profile here of final climb)

That late climb really throws a spanner in works as it gives the better sprinters a big problem especially if the race has been raced hard over the other climbs before hand. That final pitch could see someone get away and we have seen plenty reluctant chases this year allowing the brave attack to be rewarded. The narrow roads will also ensure that been in position will be hugely important. 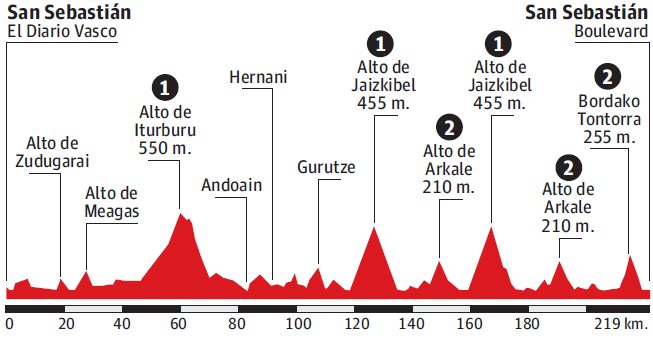 Peter Sagan is favourite but he has such a stern test on his hands here and comes off a win less Tour all be it with a green jersey draped over him. Gallopin will have a hard task to defend with the change in the route the late steep pitch as well as being a watched man after a strong Tour showing. Gerrans will need to show he is over those nasty Tour tumbles but may cope better with the steep pitch of that last climb. For now last years 2nd and winner in 2008 Valverde can reap the rewards of carrying his Tour shape into this race.

I tweeted earlier in the week that I took Stybar at 33/1now at 20s I couldn’t put any more on at that price as it seems about. Pull the trigger on Mollema at 40/1. He seemed to have gotten over his mid tour slump and he can handle this sort of finish so he could prove very involved in this one. Valverde can have his hands aloft