Trending
You are at:Home»Cycling»Grandes Prix Cyclistes Quebec 2014 Preview
By gghofman on September 12, 2014 Cycling

So while the big race in Spain is coming to a close we do have the Grandes Prix Cyclistes Quebec from Canada there big racing weekend of the year.  This is a last World Tour one day race before we get the Worlds in Spain. Quebec is just under 200 yards with 11 laps of an 18km circuit and it is the flatter of the two races. Its the 5th year of the race and each year has seen a quality winner so the race is not lacking in talent. Qubecd does have a climbing finish with the final km being a 4% up hill.

Last year Gesink sprung a surprise on a route many thought a good sprinter would win he proved just too good for Vichot and Van Avermaet more the type of rider expected to go well here. Previous winners have all been classic type guys in Gerrans, Voeckler and Gilbert.  However fact was Gesink did love this race and has podiumed 3 of the 4 years of the race. The course has had a change for this year reducing the climbing with a longer lap and a longer bit of flat.

The finish of this race is a bit of a drag and it reward patience and timing of a rider. Simon Gerrans is a clear favourite with the market for this race with a win in 2012 being his main selling point. He has raced slightly since leaving the Tour early but his 3rd  in Vattenfall shows he is still near a good level. He didn’t enjoy the Canada swing in 2011 but in 2012 he was a winner here and a 4th in Montreal. Price wise he is tight to argue for. Van Avermaet is another obvious choice on the podium the last two years of this race and backed by this very blog last year at massive odds. Last but not least of the hotly fancied trio here is Kristoff who is having a career year. A solid Tour has seen him bag wins in Norway and Germany since but this is a different test to his riding skills on his first trip to Canada to race.

OPQS are strong handed here with Stybar back from his nasty crash but also Meersman is here. Impey is back from a temporary absence and won in Alberta on his come back. He would be a good call but is he allowed to upset Gerrans in this one. Arthur Vichot was 2nd last year and fits the profile of a rider who should suit this course. He is in decent order and should present his challenge well here. He can have his off days however which is a worry. Belkin could have a surprise option in Hivert if allowed to focus on himself rather than Van Marcke who could also present a threat. Van Marcke has looked on it and surely shows himself. 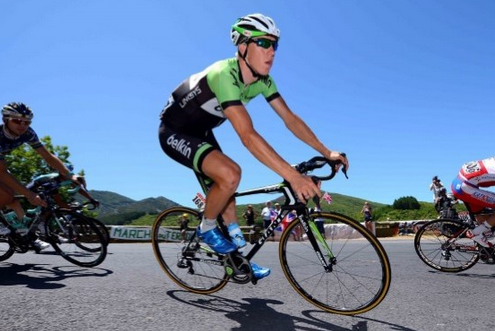 Van Marcke is proving a price wise selection for Quebec

Hermans has had a decent American swing of late and could be in the Gesink mould here.  He has been knocking on the door without a win this season. Astana confuse me however its hard to tell who the might feel fits the course best and maybe Westra is the best choice but will Astana feel the same way. For Trek Busche has had solid time over these shores but might be out classed in this field. Giant have the in form Dumoulin here and his side kick Geschke could have his say too. Sky come duel handed with Thomas and Boassen Hagen. Thomas looks sharp and this route could well suit him. Lotto have a few choices and 2012 Gallopin did well in these races. Garmin lead out with Slagter who should enjoy this type of race but also watch for Navardauskas too. Perhaps Coquard who rode to 18th here last year can take on this easier route with a year more in the legs and mind.

I will add picks of both Thomas and Vichot who I feel offer some value and should be keen to get involved. Since advised Van Marcke is now 80s but anything down to 50s is probably worthwhile for him. Dumoulin is still 50s with Bwin.