Trending
You are at:Home»Cycling»Ronde van Vlaanderen 2015 Cycling Preview
By gghofman on April 4, 2015 Cycling

Ronde Van Vlaanderen or Tour of Flanders takes place this Sunday one of the best races, despite the many moans about race route changes. The fact is a circuit race built in helps generate revenue from visitors on what can be a sport so hard to generate fan revenue. I have no issue with it in moderation. The route is not far off that of 2014. You can view full profile here.

It won’t be too warm but it will be a dry day for the riders so no crazy survival stories. The route does lead to survival because moving before the late and difficult parts can often be suicide. The Paterberg where we often see the real hard pace and spils of lead group leads onto that motorway time trial where you can see well ahead. With both Boonen and Cancellara on the sidelines we will have a very fresh look to the podium.

Devolder now leads Trek in the absence of Cancellara and I did get on early at 80/1 + as he looked very sharp in De Panne this week he is of course a former winner. Etixx are strong handed as always in the one day races Terpstra and Stybar are the obvious captains but as always expect a 3rd wildcard to take aim. Lotto have Greipel in which is interesting, Roelandts is the obvious threat he can looked as good as any at times and went solo last week but caught with bit in hand. Bak had a good De Panne while Debusschere was great in GW and could go again. Van Summeren is the Ag2r leader but he is better suited to Roubaix. Astana have Boom 11th in 2013 as there best option although Roubaix looks a better target. Belgium rider De Vreese is proving a nice signing for them and on debut he could thrive and top 20.

BMC most certainly focus on Van Avermaet with no distractions from Gilbert who is absent. 4th 7th and 2nd show how close Greg is to winning this race with an extremely strong support cast including Oss. The FDJ team looks an open one with it looking unsure which card they should play. Bonnet did top 10 way back in 2010. IAM are lead by Chavanel at 35 this might be his last chance and still, I feel hes lost a little bit 2nd in 2011 his best attempt. Devenyns was a top 20 last season but after a good Oman he has tailed off. Haussler has quiet a strong record here and was 6th back in 2013 and 2nd in 2009.

Pozzato is quietly going about his business and he certainly has a big race in himself. It was a slightly off 17th last year but we know he is stronger than that. He 2nd in 2012 was his best ever result. He has had two other top 10s and can hold himself in this race, dry conditions suit him. His team mates have some good form this year and maybe they find there feet here at last. Valverde isn’t here for Movistar and often with Spanish teams they are here just to make up the numbers. Rojas was 18th in 2011 but only started in 2013 since.

Orica are always hard to access plenty talent in the team but who suits Flanders. Hayman has preferred Roubaix but one top 20 to his name. Keukeleire could go well hes still improving and has twice been in the 30s. Cannondale are simliar with plenty up and coming riders. Bauer is down as leader but his record might suggest otherwise.  Langveld has taken a few tumbles but he has been 10th the last two years, and 5th in 2011, however how banged up is he here. Giant have one sure fire option in Degenkolb who looks very well rounded and already has San Remo to his name this season. He has been there the last two seasons if just lacking in the final test. 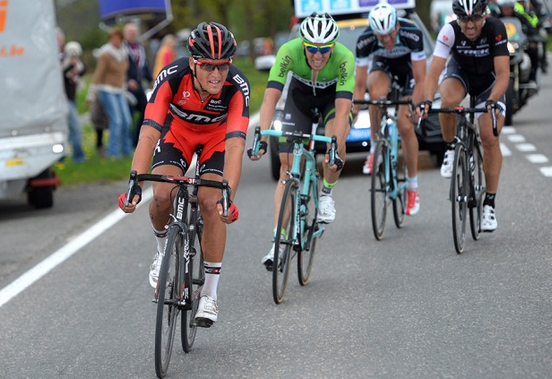 Van Avermaet can lead the favourites

Katusha have two super stars right now in Paolini and Kristoff.  5th in 2014 and 4th in 2013 least we forget how good Kristoff has been in this and he comes in looking as strong as ever. Paolin was 3rd in 2007 and 7th in 2012 and again with Kristoff he will ensure Katusha are involved. Jumbo are built around Van Marcke for sure he went mighty close before and he will want win so badly from his 3rd last year. He has looked little unlucky this season but peaking just at right time, he has team mates enough to assist him till late on. Sky do have Wiggins here but he is built and planning for Roubaix so I fully expect Thomas to lead here in return for helping Wiggins if needed in Roubaix. Stannard will have show he is back fit from his tumbles although his record in this race is average anyway. Thomas is a super talent and his e3 win will have him on top of the world. 8th last season he is at the top table to win this now I believe.

No doubting the mad house that is Tinkoff will work with Sagan here. With a 5th and 2nd to his name here Sagan has been talked up for 3yrs now to win here and with a stronger than usual team could that help his chances? He has Breschel with him who looks in good form and has two previous top 10s in the race. Gatto has been good the last two seasons till late on and is the best option by far in the Androni team. Bora got there invite but are short on talent used to a test like Flanders. Archbold is a young talent and has come from lower racing interested see how he gets on. Thwaites is also a good racer and worth watching if he can get involved.

Cofidis may look to Van Stayen there Belgium rider but this is his first time round here. MTN have a line up for flatter tests. But Farrar has had 5th here before but both Ciolek and Goss have struggled with this. Happy for Roompot to get an invite as a likely growing Dutch side. Hoogerland is there big name rider and in just 3 starts he has been just outside the top 10 twice. Who leads Europcar is beyond me with no stand out man in my eyes for Flanders. Topsport go for an all Belgium line up as is there team mantra. Most of the team will have ridden this terrain in a shorter format. Theuns has only his 2nd start in this but 2015 he has looked fantastic and I would like to see him go well. Wanty name two Italians in with there mix. Leukemans has a strong record in this race with 4 top 10s in all his will lead the line and he is in decent shape. Marcato should provide strong support.

The Thomas price has him nearly favourite with Van Marcke I enjoy both riders but this is a very open renewal and plenty will fancy a chance at glory. Double figures on two other riders I like in Kristoff and Stybar are now gone. Van Avermaet has a support of his team and is a bigger price than all those four in what is likely a race more suited to his talents. Devolder is now 40/1 (backed at 80/1) but he still has a little value at those odds.

Both Pozzatto and Leukemans should not be 100/1 plus in races they have rich history in both have had solid seasons so far.