The Davis Cup starts off this week with the 1st round of games. 16 nations make up the World Cup the so called elite of tennis. The final takes place on the 21st of November and in 2013 was won by the Czechs who took advantage of Djokovic not playing the doubles to record a famous gamble from tennis punters that week.

Top Half of the Draw: (S=Seeded, health C=Choice of Ground) 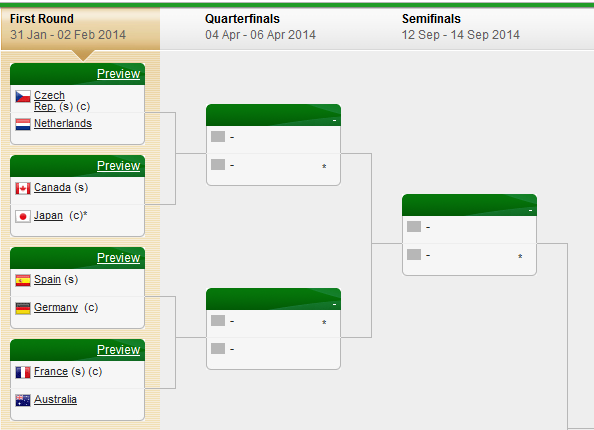 The Czech s open with a nice defence v Netherlands. They rely on Berdych and Stepanek in the singles and doubles but Hajek and Rosol provide decent back up. Given I feel Stepanek is in decline the Czech s would do well to defend.

The Dutch have no stand out star with Haase, web De Bakker and Sijsling making up the core of the squad. Rojer provided a useful player for doubles and the Dutch easily navigated itself back into the World Group after just failing to the Swiss in 2012.

Canada not historically considered a tennis powerhouse came to the table last season knocking out both Spain and Italy before losing 3-2 in the Semi to Serbia. Raonic is a top player and Dancevic is useful as well as rising star  Pospisil who plays the doubles with Nestor. A very well settled side but relying on Roanic in 5 set formats to be a free point not ideal.

Japan relys on Nishkori as the base of their squad but also Ito and Soeda are good players, salve they beat Columbia in their qualifier to get back into the World Group. They will find this difficult.

Spains strength is their depth, Verdasco, Garcia Lopez, Nadal and Granollers all played last year. Marc Lopez and  Ramos also played with Nadal out for the start of the season.  Ferrer was a 6-0 in 2012 but did not play in 2013 while Almagro was 5-1 and also did not play in 2013. Ferrer would be welcomed back unbeaten on clay in Davis Cup tennis.

Germany have a nice squad especially if Haas can return to full fitness for this years campaign.  Mayer is coming on leaps and bounds with Kohlschreiber and Brands providing a useful spine to the team. Doubles proved a weakness last year and losing 5-0 to Argentina was a poor result.

France an under achiever in Davis Cup terms considering the talent pool at their disposal but prehaps the lack of a real top dog has held them back. Llodra, Gasquet, Benneteau, Tsonga and Simon made up last years squad. But with Monfils back fit he could be called into the fold. Chardy who had a run down under could also be considered.

Came up to the World Cup after being relegated down last year, Hewitt leads a half decent side of Tomic, Ebden and Matosevic with Kyrgios an up and comer. its been a bit of a struggle for them and taking on France first up will be difficult.

Bottom half of Draw: 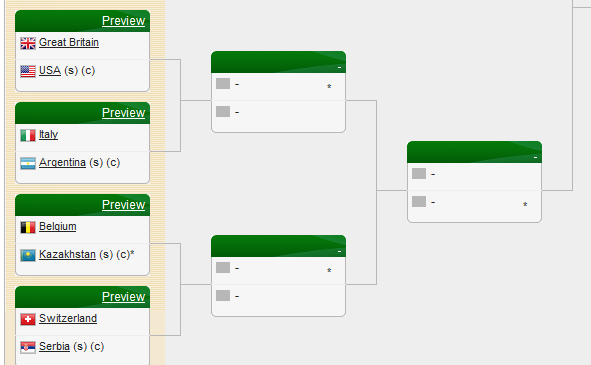 Team GB is largely held together by Murray, with Ward and Evans a mixed bag in the singles. With Evans no out due to personal issues this is a team relying on Murray winning both his singles and doubles a big ask coming off a slow start to 2014.

USA contains two strong servers in Querrey and Isner. The Bryan brothers were once seen as a solid point in the doubles but lost both their ties in 2013, poor considering their record overall is 20-4.  Its interesting to see who will be the 3rd man for the USA should they need him Harrison played in 2012 as did Fish who is still suffering with those heart issues.

Italy have strong base of Seppi and Fognini who can be though tests for anyone but lack a strong 3rd man as Bolelli has not been the best in past year. Starace played bit in previous years but is struggling with his form.

Argentina were lead by the superb Del Potro in 2012 when they went well but did not play last season and Nalbandian has also retired from the game leaving them short. Monaco, Mayer, Zeballos and Berlocq were the spine of the 2013 teams but will find this tricky.

Belgium have landed a nice draw to start off. Their core consists of Darcis, Rochus, Goffin and Bemelmans for two seasons now. The next round if they can pass the Kazaks will be a nightmare.

Kazakhstan have shown how investment in sport is paying off with this huge step up to World Cup level. Golubev, Korolev and Kukushkin lead the team last year with Schukin used in the doubles. Its a team that has been in place for the past 3 year and can be said to be over achieving but it keeps getting kind 1st round draws to avoid relegation play offs like last year.

Switzerland take the eye just as Federer has been moved at Swiss number 1 by Wawrinka who has vowed to give his all to this Davis Cup campaign. They have never won it and were runners up in 1992 so it would be huge for tennis in the country. They pushed the Czechs close last year and good go one better if the return of Federer is true, as the Swiss are slightly weak for a 3rd man with 3 different options used last year to blend with Wawrinka.

As the old joke must go Djokovic must have hurt his back carrying this side last year. The loss of Tipseravic for the final hurt them as Troicki steeped into the singles void, Djokovic could miss the opening rounds and their doubles pairings were found out without him in the final.

The Swiss were an early bet for me and I have become more confident now reviewing the draw and the teams. With Federer likely to join in and Djokovic likely to miss their opening rubber and a nice Quarter the passage is set for the Swiss to break through for a Davis Cup win.

Italy have also been handed a kind draw and their price is quiet big. The were 100/1 in the past week but the money has come for them. Canada is the same with a nice opening draw it also has a good chance to catch out the defending champions who have issues in the camp.

The Davis Cup World Cup Draw starts this weekend the 31st of January.