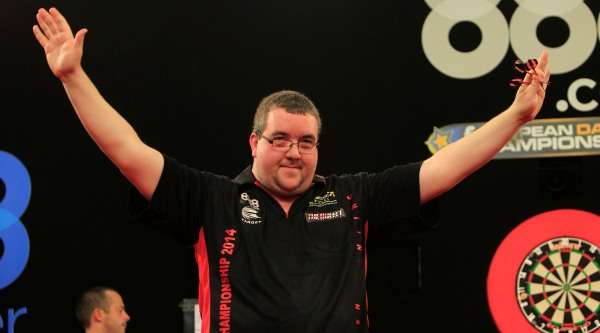 Stephen Bunting was the toast of Mullheim last night as he won a last leg decider in a sensational contest against Phil Taylor. The Asset was on fire last night hitting no less than 10 180s in a three dart average of 102.21 claiming a famous victory. He went off to a rapid fire start leading 3-0 before Taylor got an important checkout of 81 to reduce the arrers to 3-2 at the first break. Taylor then hit a 12 dart leg finishing on 121 and hit another 15 darter to level the match at 5-5. The 14th leg proved to be most crucial as Bunting hit 8 out of 9 perfect darts, wiring out on double 12 for 9 dart glory but importantly he broke Taylor’s throw to lead 8-6. Taylor responded grabbing two legs back but Bunting kept his nerve with a maximum and 140 in the final leg to win.

Michael van Gerwen had a major scare as he got through a determined Brendan Dolan to win 10-8 setting up a quarter final match with Dave Chisnall. The first five legs all went against the throw as Van Gerwen hit a 116 checkout to lead 3-2. MvG had plenty of trouble on the doubles as he was behind 6-4 at the break but fought back to level the match at 8-8. In the crucial 17th leg both players missed doubles. In the end van Gerwen did enough to win claiming a 13 darter in the final leg.

There was drama in the afternoon session also with Dave Chisnall edging out Ian White in a real up-and-down match by 10 legs to 9. The ninth leg summed up the match as Ian White hit 7 perfect darts but ended up losing the leg as Chisnall hit a 70 checkout punishing Whites double troubles. In the 16th leg Dave missed 3 darts to let White grab a 9-7 lead however Chizzy Rascal found a way to break back and hit two consecutive 180s in the final leg for victory.

Terry Jenkins also had a very professional win against Robert Thornton where he always seemed to be in control of his opponent. Although he had a poor first session he got a 121 finish on the bull to lead 3-2 and that seemed to change the outcome of the match as he continued in front to win 10-8. There were also impressive wins by Raymond van Barneveld and Peter Wright who face each other in the quarter finals.

It seems a bit tough on Mervyn King to be playing in the first game tonight considering his match against Ronny Huybrechts finished after 11pm. Hopefully the extra hour’s sleep has helped him for this match against Klaasen who hit ten maximums in his match against Jamie Caven. It has been a while since Jelle has been on the TV screens and this is a good opportunity for him to rise up the rankings should he get to the semi-finals. However, he did show his weakness at the doubles hitting 10/30 yesterday and I think King could exploit this by some high pressured scoring. I think the value here is backing over 16.5 legs at 8/11. I feel this could be a close encounter with what I expect to be a quiet atmosphere. Tiredness may be a factor in King’s play while Klaasen may also have issues on the doubles

Bunting will be looking to continue his scoring form as he faces The Bull Terry Jenkins. Terry will not be overawed by his opponent’s win last night as he does have a lot of belief in his game at the moment. He showed this when beating van Gerwen 10-8 in the UK Open in March so I expect this could be a close game. I think the value bet is Terry Jenkins to get the highest checkout at 5/4. With Bunting’s high scoring he may not give himself many chances of a three dart checkout finish. Jenkins has been finishing well lately so I think he may do enough to win this market.

Chisnall is still looking for consistency but can land the maximums

After his scare van Gerwen will be hoping to improve on his doubles as he takes on Dave Chisnall. Chizzy will be hoping he can produce a more consistent effort when scoring as he can blow hot and cold on the big stage at times. However he has shown he has not none of the maximum scoring ability and I think the line of over 10.5 180s at 5/6 is a little low. The players posted 18 maximums between them yesterday and there is no reason why this scoring will not continue today. If van Gerwen continues to miss his doubles, it will give Chisnall a chance to keep the game close which will help this bet also 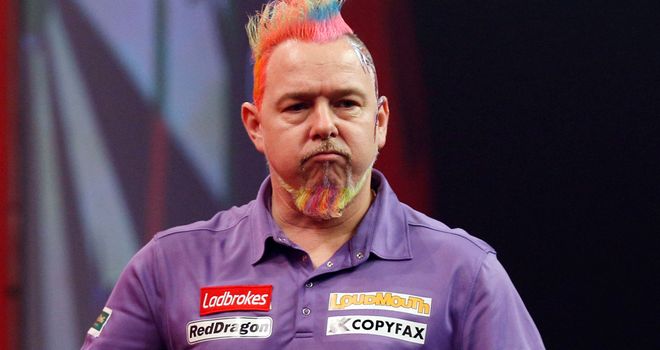 Wright’s finishing could be the difference in their match today

The final match of the day sees Barney take on Snakebite for a place in the final 4. Both players were unhappy with their performances in the last round and will be looking to try and score better today. I actually thought both players impressed in different ways. Wright kept hold of his throw and pounced on the one error Huybrechts showed in the opening two sessions whereas Barney came through a tough game with van der Voort posting a high average. Between the two players I think Wright has shown the better form and I will back Snakebite to win at Evens. Peter’s form on the doubles was solid, hitting the 10 out of 20 attempts yesterday and I think this could prove to be the difference between the two.

Not an expected pairing in the semi-finals but both Terry Jenkins and Mervyn King have put in brilliant matchplay performances to get to this stage. At the odds I fancy King to win at 11/10. I feel that he can be a little more consistent than Terry and although The Bull can hit some big checkouts, I don’t think King will be fazed. I think he will keep a cool head to win this match tonight.

It is the battle of the Dutchmen again as Barney takes on MvG. This tournament has been massive for Barney as his ranking will increase after this tournament. Michael put in a much better display against Dave Chisnall earlier today as the pace of the game suited him much more. I think Raymond will try to slow down the match but in the end Michael will have too much in the locker for Barney. I shall have a small bet on van Gerwen to win 11-7 at 7/1.

Michael van Gerwen added another highlight reel to his career by hitting a nine darter in his match against van Barnevld, The young Dutchman seemed to be in trouble as he was not playing well missing several doubles. That result along with the 161 checkout helped him comeback to win 11-6. He faces Terry Jenkins who has been in great matchplay form hitting a key 120 checkout to send King packing. I think this match might be closer than what could be expected as van Gerwen has shown some weaknesses on the doubles. However I still feel he will have enough for victory and I believe he will win 11-7.