Trending
You are at:Home»Darts»PDC European Championship Second Round Matches
By seamusshanley on October 25, 2014 Darts, PDC Darts

There were quite a few shocks last night in Mullheim as several of the in form players on the circuit succumbed to defeats in the quick best of 11 leg format. Gary Anderson lost in a last leg shoot-out against “The Bull” Terry Jenkins. It started well for the Scot as he had a 3-1 lead with a 13 dart first leg, however Jenkins would not go away as he responded hitting finishes of 91 and 116 to bring it to a decider. Anderson missing three crucial doubles from 40 in the final leg as Jenkins closed the match with double 10 for a great victory.

Ronny Huybrechts had a well deserved win over James Wade

Perhaps the most surprising result of the night was the manner of Ronny Huybrechts victory over James Wade in which the 6-4 scoreline did not tell the whole story. This tournament brings back fond memories for the Belgian having beaten Phil Taylor 10-5 in this event in 2013. He settled into the game quickly hitting an impressive 161 checkout to lead 3-1. Ronny continued his great form winning 6 of the opening 7 legs. He gave Wade one of two opportunities to close back to 5-4 however he kept  his nerve in the 10th leg taking out 48. 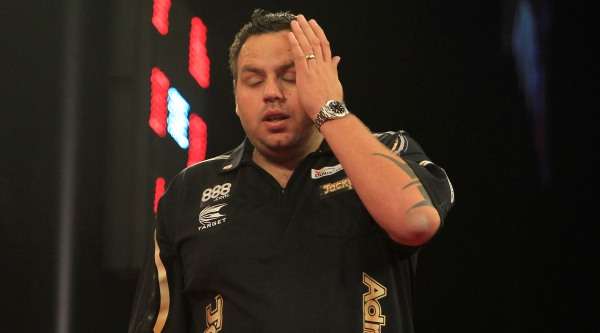 The defending champion gets knocked out at the first attempt

The reigning champion Adrian Lewis was also knocked out last night by Jelle Klassen in another close contest. Aidy missed two key darts at double 10 in the second leg to let Jelle close out on double 6 to grab a 2-0 lead. Lewis did respond well to take a 4-3 lead, however the Dutchman found another gear hitting a ton checkout and scoring heavily to send Jackpot packing. Peter Wright also had a major scare before closing out a 6-5 win. Raymond Van Barneveld showed some determination, as well as a new pair of glasses, in defeating Simon Whitlock 6-4. There was also a fine win for Brendan Dolan who averaged 104.68 in beating Michael Smith.

The action starts early again today as there is an afternoon and evening session to complete the 8 matches today. In this round the matches are best of 19 leg format. The first match of the day sees Terry Jenkins face Robert Thornton. The Thorn beat Rowdy-John Rodriguez in the last round and is going through a good spell in form lately having hit a nine darter against Wade in the Grand Prix lately. It was great to see Jenkins in good form last night but I think the Scot might have too much tonight and I will back him on the -1.5 handicap at 5/6. 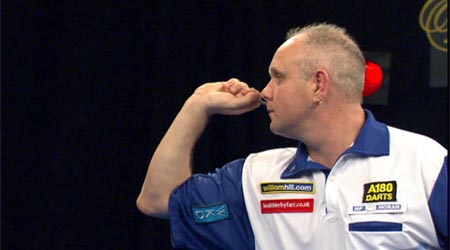 White is overpriced in his match v Chisnall today

In the second match Dave Chisnall faces Ian White and at the odds of 5/4 I think White is tremendous value. Ian played superbly against Wes Newton yesterday hitting 6/11 doubles in his 6-1 victory. There is no doubt Chisnall can match and ever better White’s scoring on his day however doubles has always been inconsistent for him. He needed 16 attempts on the outer circle to beat Artut in the first round and will be punished if he does the same today.

Jelle Klassen faces Jamie Caven in the afternoon session also and I will back over 16.5 legs in this match at 5/6. Jelle and Jamie are both quick players who like to go about their business without any fuss. Sometimes both of these players can have a lull in their matches due to their style of play and I reckon they are similarly matches against each other. I don’t expect to see one player pull away from the other here.

I will also back Stephen Bunting to hit more than 4.5 maximums at odds of 8/11 against Phil Taylor. The Asset was in tremendous form on the treble 20 bed in the World Grand Prix and I can see him keeping this match close on current form. In the longer format I think he can score the amount required to beat this spread

I also think Ronny Huybrechts is a big price and will back him to beat Mervyn King at 9/4. King did not have an easy time on the doubles against Christian Kist yesterday hitting 6 doubles out of 22. Ronny showed all his battling skills against Wade yesterday and theres no doubt that he wont go down without a fight. I think King did show a couple of weaknesses in his game that the Belgian could exploit to win