Michael van Gerwen and Raymond van Barneveld played out another classic match in The Masters last night in which the game had pretty much everything. There was some fine high scoring and big checkouts by both. However there was also some bad mistakes by both too. MvG did miss big numbers when trying to checkout at times and both players struggled to hit their doubles. Barney established a 9-7 lead however when the pressure came in the 18th leg, Raymond scoring went astray as he was unable to hit a big treble for most of the leg. This mistake proved to be fatal as van Gerwen took his chance and then played a magnificent final leg on his throw hitting 134, 180 and 171 and then hit double 8 to seal victory.

Adrian Lewis had a good start to the tournament beating Kim Huybrechts 10-4, however the match was second in the Belgian’s mind as his mother is in intensive care at the moment having recently had cancer surgery. Justin Pipe battled against against the Scottish crowd to defeat Peter Wright while Phil Taylor beat Wes Newton 10-4 with an average of 110.05. He eneded up forgetting his shoes to the event so had to rely on borrowing some shoes backstage for the match. Mervyn King had a typically solid match against Simon Whitlock reeling off 5 legs in a row to come from 4-2 down to lead 7-4. The King never looked back from that position as he held his throw comfortably to win 10-7.

Pipe dominated the early stages of the last round in Peter Wright but I dont expect the see the same thing happening against Mervyn King today. It was a big win for Justin as he is looking to bring some of the form in the Players Championship events to the TV screens. Both of these players have improved well this season but I will edge this match in King’s favour at odds of 10/11. Mervyn seems to always produce solid clinical darts when required in the big stages of a match. It was a little worry for Pipe fans to see Wright coming back from 5-0 to challenge for the match. I think that King will be able to hold his throw when required to win.

Wade is enjoying his darts at the moment

The Machine recorded a very impressive 10-5 win over Brendan Dolan and now he faces Jackpot for a place in the semi-finals later tonight. Wade was in typical clinical form, not giving Dolan any opportunity of making a comeback hitting 120 and 107 checkout finishes. Lewis also had a good victory but for reasons outlined above his opponent was not able to fully concentrate on his game. He will face a much tougher challenge today and I think Wade will beat Jackpot at odds of 10/11. Lewis has all the quality to be challenging to win major tournaments but I feel as though Wade is the better match-play player between the two. Similar to Terry Jenkins, Wade has been able to hit some crucial finishes and I think he will do the same today. 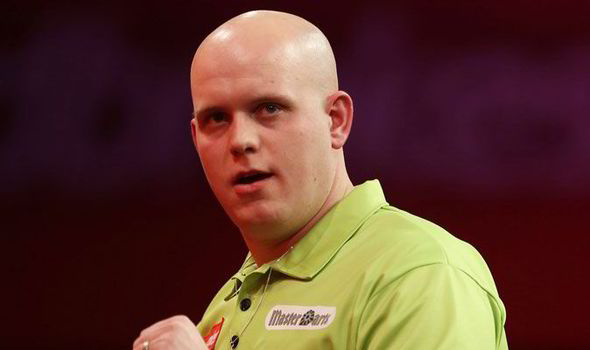 Van Gerwen came back from the brink against Barney last night

MvG will face another familiar opponent today having faced Chisnall in Mullheim last week. This promises to be an explosive encounter between the two after 13 maximums were shared between the two last week. Both players will be able to perform well due to their playing style suiting each other. Last week Michael won through 10-5 and I expect that he will be able to win by a similar amount today, I will back Mighty Mike to win by the handicap of -3.5 at odds of 8/11. Chizzy is capable of scoring as heavily as van Gerwen but I think he may struggle more on the doubles today than his opponent.

The final game of the night will see Phil Taylor facing the home favourite Gary Anderson in a partizan crowd. I felt that Anderson played with some nerves early on in his game against Andy Hamilton as his throw was broken in the first leg. Once he relaxed he was able to produce the better darts between the two, however he will need to be on top of his game against Taylor who posted the highest average of the day yesterday. However Taylor has admitted he has not been practicing at his best due to his mothers recent illness. He said that hes in a happier frame of mind after her recovery but I think he is not quite put in enough practice for this weekend. I feel that this match should be close and I will back there being over 16.5 legs at 5/6.