Michael van Gerwen is looking to make it three TV major competitions in a row this weekend as he will look to become Masters champion after wins in the World Grand Prix and European Championships. He went from looking ordinary to finding the pinnacle of darts achievement – a nine darter against Raymond van Barneveld and he has to be applauded for finding ways to win his matches despite not being at his best at times. Terry Jenkins had another fantastic tournament reaching the final of the Euros after some brilliant performances against Mervyn King and Stephen Bunting. It was a shame he did not perform to his best in the final where I think nerves may have gotten the better of him. To become a major champion I think he needs to find a way to relax in the big occasion. It is not all bad news for The Bull however as his performances has gotten him in the top 16 in the world again.

In my last preview I called out Raymond van Barneveld to deliver a big performance and that’s exactly what he did last weekend. He has decided to use his glasses in tournament play for the first time and it seemed to work a treat for him getting to the semi-final stages. His win against Peter Wright was impressive especially the way he closed out the match with a 144 checkout. So long as he doesn’t get too negative during matches Barney will always have a decent chance of providing a shock. 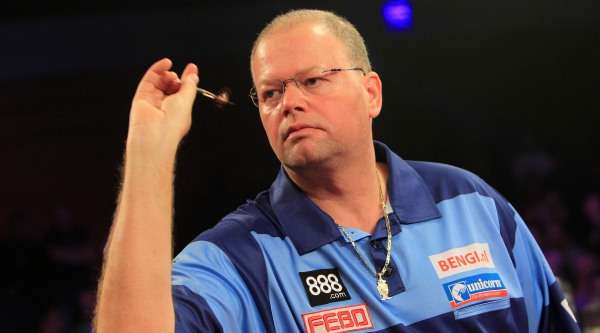 Can the specs provide the answer for Barney again?

We have a bumper Saturday in store for us as in this tournament only the top 16 players in the world at the time of the draw qualify for this tournament. Raymond van Barneveld was a lucky man to get into the draw, however now that he has I am going to have a bet on him to shock Michael van Gerwen and win at 10/3. In my opinion there were a few worrying signs in MvG’s game (as strange as it is to say it) last weekend. It was strange to see Might Mike perform erratically on the doubles and I think Barney might get himself motivated for this event in front of the Scottish crowd. He has beaten van Gerwen over the last few years in the Grand Slam of Darts and the Premier League so at the odds I think he is a value bet. I shall also have a bet on Mervyn King to beat Simon Whitlock at 6/4. King has been playing at a very impressive consistent level this season reaching the UK Open and European Championship semi-finals. It hasn’t quite happened for Whitlock for many reasons this year so far so I believe this is one of the better times to play the Aussie. I fully expect King to put in a solid high 90s 3 dart average and I think it will be enough for him to win.

I also quite like the odds on Dave Chisnall to hit most 180s against Robert Thornton at 5/6 in their encounter. Chisnall produced his best game last weekend against van Gerwen when the maximums flew in between the two with 13 thrown in all, Chizzy hitting 6. The flow of this game will suit Chisnall’s ability and I would expect him to be pressuring Thornton with his big scoring on stage.

Finally I believe the match between James Wade and Brendan Dolan will be close and I will back over 16.5 legs in the match at odds of Evens. Brendan showed how confident he is in his game now with a big display against van Gerwen just losing out 10-8. Wade is in similar bullish mood having reached the Grand Prix final lately so I think these two will win enough legs to win this bet

Looking at the tournament overall I am keen to take on Taylor and van Gerwen as I will back Gary Anderson to win the tournament at 12/1. The longer best of 19 legs format will suit him more. He was caught by surprise by Jenkins in the first round of the European Championships in the quick best of 11 leg format. However this week I think he should be able to get past Andy Hamilton and if so this will settle him down for the rest of the tournament