The last 16 provided plenty of drama especially last night as Adrian Lewis hit his second ever 9 darter at the World Championships but still lost out to Raymond van Barneveld in a classic encounter by 4 sets to 3. Lewis did average over 106 at the end of the first set and looked like he would take apart the Dutchman however Barney never gave up and seized one of his limited opportunities to break Lewis throw in the final set. He will now face Stephen Bunting who blitzed his way past Michael Smith 4-2. The Bullet got off to a great start against Bully Boy as he lead 3-0 and despite a spirited fightback from his opponent he held on to beat his opponent hitting 8 maximums and 102.34 3 dart average in the process.

Phil Taylor had to survive a massive scare to beat Kim Huybrechts 4-3 in their encounter holding his nerve in the 6th set in particular hitting 40 with The Hurricane waiting on 32 to win the set in the final leg. The Belgian had his opportunities to win but couldn’t get the scores he needed at crucial times to get the famous victory. Taylor will now face Vincent van der Voort in the final 8. The full list of fixtures are below

In the first match I think van Gerwen will have enough to beat Thornton and will back the Dutchman to win on the -2.5 sets handicap at 3/4 odds. It is true that Mighty Mike has not been at his best form in the tournament so far but did show good battling qualities in his matches so far especially in his win against Joe Cullen in the first round. Although Thornton has not dropped a set so far this is a significant step up for the Scot. I think van Gerwen will be able to hold his throw comfortably enough to win by a few sets. 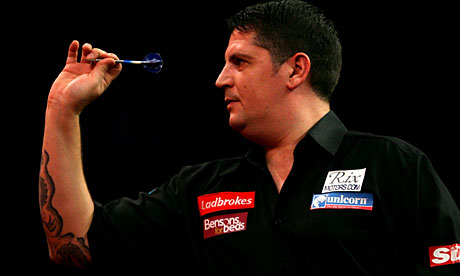 I believe that Gary Anderson will be able to get a 3 dart average higher than 100.5 at odds of 4/5 in his match against Peter Wright. Anderson did have a lot of trouble with his doubles in his first round match against Scott Kirchner but since has managed to get a 103.72 average against Klaasen and 104.54 average versus Reyes. Over this year The Flying Scotsman has proven to be better with his finishing and has turned into a great all round player. Wright should keep the standard of the match high enough so that Anderson will win this market bet

In the Phil Taylor Vincent van der Voort match I will back the highest checkout of the match to be under 140.5. Taylor did have some trouble hitting his doubles against Huybrechts not achieving a checkout of over 100 in the match. Van der Voort has done really well to get to this stage but similarly I don’t believe the Dutch Destroyer will be able to hit the combination finish under pressure

In the final match of the evening Stephen Bunting and Raymond van Barneveld should be a close match and I am backing there to be over 7.5 sets at odds of 10/11. Barney showed great resilience to get through his match against Lewis winning the 2nd and 4th sets despite having a lower average than his opponent. I think that he can do enough to get the sets required to win this bet. I also believe that Bunting’s scoring power will be enough to win the number of sets also.