We already have seen a number of shocks in the first few days of action in Alexandra Palace with Simon Whitlock, Wes Newton and Paul Nicholson being among the list of casualties so far. Simon Whitlock never looked comfortable in his match against Darren Webster. The Demolition Man always seemed to have The Wizard in trouble throughout scoring better than the Aussie on the night. Simon has not been able to hit any big checkouts in tournaments of late and did seem to have some nerves on stage. It is a worrying sign for Simon and he will need to get back to practicing hard in order to keep in the top 16 next year. Benito van de Pas continued his fine form when beating The Asset Paul Nicholson in a tight encounter 3-2. Benito has had a great year in the first season in the PDC beating Michael van Gerwen in the Gibraltar Darts Trophy and will be hoping to start a good run of form to move up the world rankings.

In tonight’s matches I fancy Jani Haavisto to be able to use his experience and beat John Michael at odds of 8/11. The Finnish player topped the Scandinavian Order of Merit for the second year in a row and did make the European Championship last year losing out to Justin Pipe. He should be able to score better than his opponent and I feel he will be able to get through.

I expect Dave Chisnall to be able to get through his match against Ryan De Vreede easily and will back Chizzy to hit over 4.5 180s at odds of 5/6. Dave has proven to be one the most maximum scorers on the PDC circuit when he is relaxed. If the match goes his way tonight he should be able to beat the spread here. Vincent van der Voort has enjoyed a recent resurgence in form and I think he will do enough to beat John Henderson 3-1 at odds of 5/2. Van der Voort had a great performance in the Players Championships recently reaching the semi finals where he lost to Gary Anderson 11-7. It was just the encouragement the Dutch Destroyer needed as he had been playing very well without getting the rewards he deserved. John Henderson caused a shock last year by beating Dave Chisnall in the first round, however I feel that he can tire in the later stages in matches. He should do enough to get a set but I think Vincent will be able to build on his recent form to win. 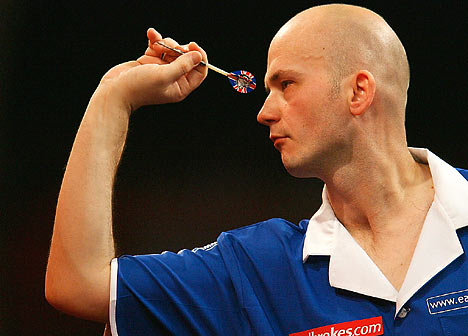 Jabba’s quick throw should be enough to blow Hogg away

Finally I shall back Jabba Jamie Caven to start off in the World Championships with a 3-0 win over Jason Hogg at odds of 6/4. Caven was one dart away from a nine darter in last years World Championships in his match against Raymond Van Barneveld. He reached the Austrian Darts Open final earlier this year beating Terry Jenkins, Stephen Bunting and Phil Taylor, eventually losing the final to Van der Voort 6-5. He has the quality to start off well and to take any opportunities that will come his way.