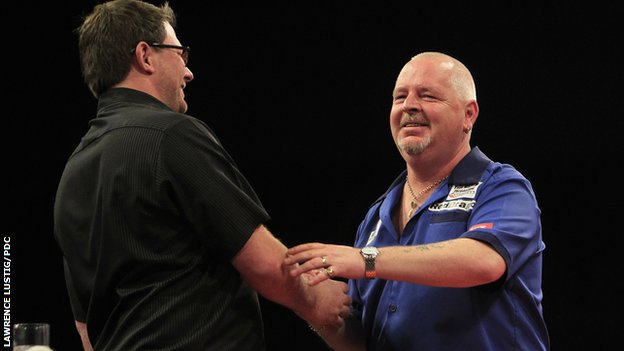 Amazing scenes in Citywest as both Wade and Thornton hit 9 darters!

No doubting that the James Wade v Robert Thornton match was the talk of the second round after some amazing darts shown by both players. James Wade managed to pull off the rare feat of a nine darter in the “double in double out” format only for it to be replicated by Thornton in the following set. The match went to the final set however Wade managed to gain control of the final set to record a famous victory. He will now face Phil Taylor in the quarter finals after he beat Andrew Gilding after some resistance by 3 sets to 1.

Kevin Painter made a great comeback from 2 sets down to beat Adrian Lewis in their match. When Aidy nabbed the second set in the last leg with Painter waiting on 60 it would have been easy for The Artist to have given up however he showed great determination in fighting back for victory.

Elsewhere Stephen Bunting won a quality contest with Peter Wright but not after busting a 130 checkout hitting 12 on the last dart. However The Asset got a second chance and checked out the same score with a bull finish. Mervyn King continued his good recent form with a commanding 3-1 sets win over Raymond Van Barneveld. The Barney Army fans will be wondering what happened to the Dutchman as he lost his way from being 2 legs up in the opening set.

For anyone following my preview tips we are one win away from landing the Stephen Bunting quarter win bet of 4/1. He faces the Prince of Wales Richie Burnett who has shown real guts and determination to get to this stage. Bunting sometimes has had trouble starting off in matches but once he does he has outscored all his opponents so far. I feel as though he should be able to do so tonight and will back him on the -1.5 sets handicap at 5/6. I shall also have a small correct score bet of 3-1 to Bunting at 5/2.

The second match sees the Flying Scotsman take on the Artist. Neither player have managed to make it to the latter stages of this tournament so are aiming to reach the semi finals for the first time. I have been really impressed in Gary Anderson’s play in this tournament and have decided to back him for the World Championships at 12/1 as an ante post bet. I think he will have enough to get through Painter today however I shall back the Scotsman to hit most 180s at odds of 10/11 as it represents the best value. Painter can sometimes blow hot and cold on the scoring front whereas Anderson can do enough to move into the semis

The game of the night sees the defending champion Phil Taylor take on 9 dart hero James Wade. Wade must be delighted that for once he posted a nine darter and not solely his opponent! If Wade can play to his ability and not get bogged down in mind tactics he has every chance of winning this. However all the previous encounters point to one winner. Taylor beat Wade 5-1 in the semi-finals of the tournament last year and I find it hard to see any other result. I am going to back Taylor to win on the -1.5 set handicap of 8/11

The final match of the night sees MvG take on The King in what will be a reapeat of the 2012 final. MvG is on top form and is striving to be as perfect as he can judging by his interview after the win v Dean Winstanley. King is a tough competitior but I believe Van Gerwen will be too good for him and I will back him to win 3-0