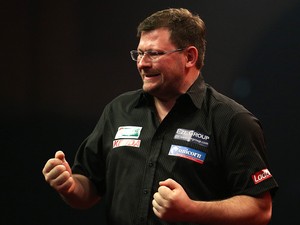 It was a spectacular night in Citywest last night with high drama as James Wade continued his magnificent form by beating Phil Taylor by 3 sets to 1. The first was always going to be the most important in this match and Taylor missed three doubles to win the set in two legs as Wade hit a 108 finish to nick the set 3-2. From then onwards Wadde flourished hitting a 142 checkout in the process to grab a well deserved win. This was a crucial win for Wade as he has suffered bad defeats before to Taylor and this performance can give him the belief to win major tournaments.

The drama did not end there as Michael Van Gerwen was extremely fortune in winning his match against Mervyn King by grabbing the deciding leg. King started off to a flyer hitting a 149 checkout in the second set while being 1-0 up. Van Gerwen then roared back into form with consecutive 12 darters to level the match. In the final set King got himself in a 2-1 advantage and looked set for victory. However MvG hit double 4 and King struggled to get away in the final leg with Van Gerwen taking the opportunity. He admitted afterwards that Meryvn was the better player in the game but was happy to come through the match,

Gary Anderson and Kevin Painter played out another great match last night with Painter coming back from 2-0 sets down to level at 2-2. The final leg of the 4th set looked set to be Anderson’s however Painter produced some magic with a 152 checkout with Anderson waiting on 36 for the match. It would have been easy for Anderson to drop his head after that however he continued his power scoring to outplay Painter in the final set hitting a 101 outshot for victory. As I said in my previous blog I have backed Anderson to win the World Championships at 12/1 and would advise punters to take those odds now as they are sure to shorten. In the final match Stephen Bunting got through Richie Burnett by 3 sets to 1. The crucial moment of the match came in the third set when The Asset came from a  leg down to win the set 3-2.

Arguably the two best players on form this week collide as The Machine faces The Flying Scotsman in what is set to be an epic encounter. The resurgence of both these players form has been very similar. Both have had to deal with problems off the oche but have come back better and stronger than ever before. This should be a close encounter with both players in fine form however I think Anderson has what it takes to win another major event now and will back him to reach the final for the first time at 10/11. I shall also have small bet on the correct score on Anderson to win 4-2 at 9/2. It is very hard to find a difference between these two however Anderson’s 180 scoring against Painter was phenomenal and that could prove to be the difference tonight

Van Gerwen will be looking to improve his performance tonight

It has been a brilliant debut season for Stephen Bunting and he is set to face the reigning world champion in the best possible form at the moment. He has come through a tough encounter against Peter Wright and did not show any nerves in his win over Richie Burnett. He will face MvG who knows he will have to improve a lot more in order to win the Grand Prix for the second time. However MvG did show great battling qualities in winning a match he perhaps did not deserve to win. It showed his competitive spirit is as strong as ever and I feel that will be the deciding factor in this match. I shall back Van Gerwen to win the match by 4-2 at odds of 7/2. I also believe MvG will hit plenty of 180s tonight and will back him to hit over 5 maximums at 10/11