Trending
You are at:Home»Cycling»Tirreno Adriatico 2015 Cycling Preview
By gghofman on March 10, 2015 Cycling

Tirreno Adriatico gets under way on Wednesday but without Froome so the challenge to Contador is weakened here this week as he seeks to carve out one big year in 2015. Its a race that has taken over from Paris Nice as the jewel in the early season crown, in my view both have there place and they offer contrasting tests for riders.

A prologue opens the race changed from a team time trial. Its a simple 5.4km test. It has 5 90 degree turns and two other easier bends to navigate. Stage 2 is pretty flat. Stage 3 is an interested day where some could lose time if not careful. Several laps of an up hill finish gives the riders a great view of what is to come. Stage 4 is more testing again, Two late climbs before a downhill finish should make an interesting race. Stage 5 is the mountain top finish that could win this race. The day contains quiet a bit of climbing before the final test. 1,100m of climbing over just under 15km so a 6-7% climb. Stage 6 has all its climbing early doors before a fairly flat run in. Stage 7 is a short time trial of 10km, its much quicker with one u turn and then two late turns.

All in all the route looks a little donned down from some of the crazy stuff thrown in previously, its likely dominating on the key mountain day is enough if you can put in a solid time trial to limit any time loss. I will list for me possible contenders before looking at the prices. For this race a good time trial will be useful with two tts totally over 15km and some power own, just one proper climbing day means good all round racing becomes a factor.

On the sprinter front watch out for Mezgec who has the Kittel sprint train lined out for him this week.The time trial puts me of backing Formolo, Rodriguez or Quintana in there current form. I am not sure it suits Pinot or Niemiec either with both time trials so flat and unlikely to dominate the climbing. Nieve is also a little weak in that test.

In the absence of Froome I am going place a little faith in Konig to do well. Uran looks a little short as he has not always delivered this far in advance, Nibali is slowly progressing but at 18s I just can’t not have a sneak. I considered Mollema but again I am always reminding of the  Bianchi time trial curse. Meintjes again is on my list this guy is a real talent and its not far off him bagging a big win. I had backed Contador at evens but the best price 7/10 with hills is just about right now and not worth investment. 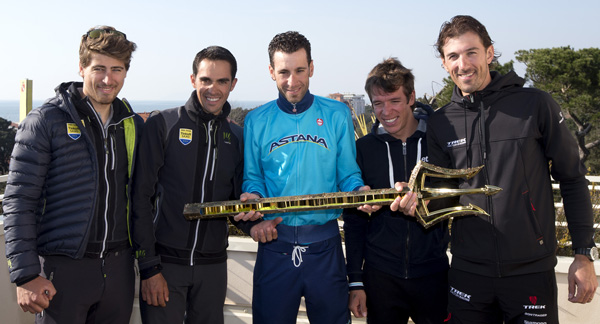 Tirreno Adriatico contenders play for the best prize in cycling

Pinnacle have yet to release prices so they might be better for Niemiec and Mollema so I may top up. Mollema has had a little set backs this season while Meintjes and Formol are two up and coming riders but Formolo won’t match him in a tt.