Stage 16 turned out a little more interesting than I had thought it would. I mentioned the polka dot battle and the early chase that meant the race regrouped allowed Majka to grab a point so that he can leads the battle for the polka dots to Rodriguez. Nibali grabbed no points on day as the large break gobbled up any points over the main climbs. As advised the Nibali price was laughable any group of favourites was going likely be sprinting against each other due to the finish. Pinot rode a stormer with his team mates to lead home the main contenders who hung on. Konig some how got himself back on before the finish while Valverde dug in deep with Peraud. Kwiatkowski in the break will find he moves up a few places with all the time he gained on rivals in the top 20.

Lucky for us Rogers who took his 3rd grand tour stage win of the year ensured our bet to come home empty handed Voeckler was denied. Kiriyenka and Serpa came home just behind with them. Ten Dam suffered and lost time to those main rivals mentioned above but losing more time than he did, Bardet. Van Den Broeck and the surprise of the day was how badly Van Garderen did on the day. Something very much amiss with him and that illness we had heard a little about.

Click here to look back on the Stage 16 Preview

Betting wise I was happy enough I happly opposed Nibali at around 10/1 this morning, and quickly fixed my opening lay of Rogers. My other lays were Majka and Valverde. I then looked to trade some of the break including Voeckler, Izagirre and Kwiatkowski. I didn’t really see many chances to side with Rogers late on although If I had been a little more up with live action than having a quick nap I would have looked to get Serpa in my book. -1.3pt was our result on the match bets and really the Voeckler bet was regrettable as both got in break but only one was the focus of the team.

Tour De France Stage 17 hits us with a super short super intense stage. 124.5km brings us another interesting short test these stages are often ridden hard and fast and I expect this to be no different. Pinot knows he has Valverde on the ropes he has his eye on 2nd place and hoping Nibali might go wrong or have his piece of bad luck. They go over 3 cat 1 climbs with the Col Du Portillon a nice intro with 8.3km at 7.1%  a fair test. The Peyresourde is a nice climb and at 13.2km longer than the past one without being too steep. They then head for the Col De  al Louron Azet a much shorter climb at 7.4km but a sterner test of 8.3%.

The final climb of Saint Lary on the Pla d’Adet is very interesting one with some steep ramps. It eases off a little 3km out for a km. But barring that is a testing climb. It has a 2km section of 10% plus to begin with. It is a bit easier at the top so expect the gaps to come early and the fight to begin then all the way up the climb.

Thibout Pinot is a man possessed right now. On the days final climb of stage 16 he properly cracked everyone bar Nibai who looked reluctant to try come past the French man who has his eye firmly on keeping his white jersey and pushing his way into 2nd on GC. He rode a decent down hill today and his team was fantastic too. But an uphill finish like this well its Brioche to him. He is the one rider I fell has had the matching of Nibali at times Peraud who also managed to follow Nibali and has looked strong certainly did well but looked like a man on the brink.

Tejay Van Garderen was on deaths bed coming off the rest day but its best to forgive a rider the rest day blues and normal service should be resumed. Both polka dot men Rodriguez and Majka are in the discussion but if ridden hard they should last 3 climbs if they go in the break but the 4th might see them reeled in especially since gaining points over each other may prove a very tiring contest. I do see value in both Konig and Peraud in this one. Both men finished with the pack and are showing some potential. 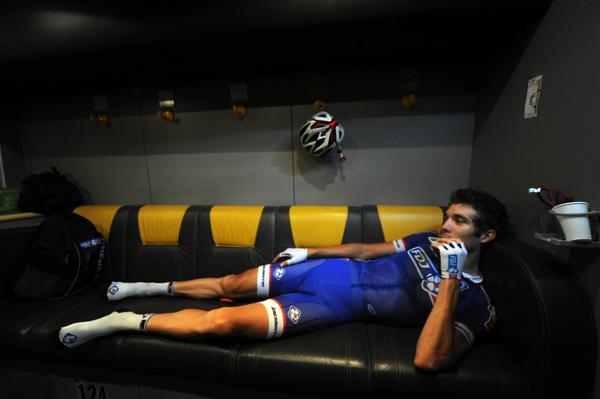