Stage 5 had lots of drama despite what could be classed as very tame weather and an even tamer profile. Just two riders got into the days break and they were doomed to fail. Froome was taken down in an early crash which also took out Mollema among others. Henderson went down late in a corner for Lotto and was carried away and Andy Schleck abanded early on.

In the sprint Kittel was made fight a lot hard as Katusha were setting the final place leaving Kristoff in the open a little too early to hold on and Demare was not far off back in 3rd from pushing Kittel as he improved on getting himself into the right spot near the front and avoiding the usual trouble he had met. Sagan took a 4th to keep a firm control over his green jersey.

The result for day was negative with -2.65pts a pity that Coquard got a little boxed in and ended up settling with following Sagan till very late in the sprint when he probably had his beating. 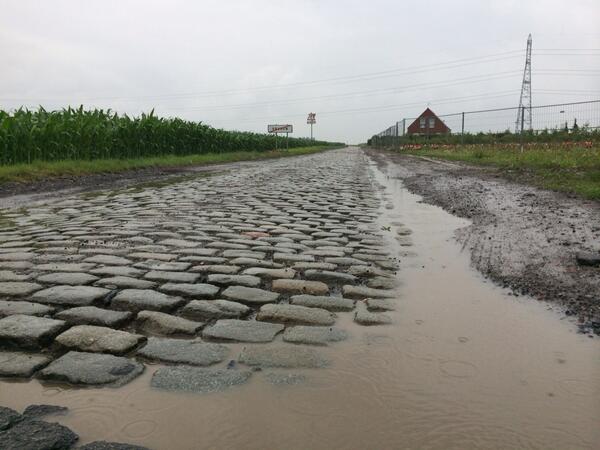 The cobbles on Monday afternoon

Onto Tour De France Stage 5 which should be utter madness at the very least and has me just a little worried for some of the more fragile contenders. The stage is not a long one at 155km but it will feature in the latter part of the stage 9 cobble sections starting with the famous carrefour de L’Arbre at 87km in. The last section Wallers comes 6.5km out and someone might try a winning move from whatever group might be left. Cobbles cause crashes and flats and getting support is not always simple. They do ride over some of the wider nicer pave for the most part but most interesting is the fact nearly all sections are ridden reverse to how they are in Paris Roubaix which means even versed Roubaix riders will be still adapting to going the wrong way round.

As can be seen in the pictures above the cobbles have had a fair bit of rain. No rider in this Tour has seen a wet Roubaix since 2001 so it really is a new test for the whole field and it is one I wouldn’t want to take on myself.

Contenders lost time back in 2010 on a course that was longer but probably had less of a test from the cobble sections. With rain washing away the cobbles and perhaps more on the way it could get very tricky. Roubaix champions Cancellara and Terpstra would be on the thoughts but Terpstra took a heavy fall and might be the little worse for wear. Interesting is the dimensions at Belkin were both Boom and Vanmarcke might be looking after there own futures by riding to impress for new contracts rather than Mollema. But anyone could crash here and take anyone out luck will play its part.

Cancellara is favourite here but really he has got to be opposed here, a 155km means the guys with much better sprints are more than likely to be able to hang on and contest a suited sprint. Demare is like Degenkolb and Kristoff in that he can handle this sort of terrain but he is more than twice price this isn’t quiet the test of Roubaix so he could thrive here. Demare can handle the cobbles