The complicated and unfair format means the actual tournament, from a betting point of view gets under way on Friday just after the last of the minnows games. Of the 8 minnows just two will get into the World T20 proper with the 8 big names of cricket forming two groups of 5.

The World T20 has also had warm ups in the two grounds the teams will play in for the duration of the tournament. Its looking likely Bangladesh the hosts and Ireland will make the final 10 given the current situation. Ireland should slot into Group 1 while Bangladesh will play in Group 2 if all goes well.

Australia stand at the head of the market at 3/1, they offer no value in this format. Their front end batting is very strong both Warner and Finch can take a game away from a team and showed that in the warm ups. Watson at 3 also scores quickly adding Hodge has been genius given how reliable he is in this format. The loss of Mitch Johnson to the bowling will hurt but they have plenty other seam talent. Muirhead and Hogg are the spin options both looked good in the big bash  but this is another level up for both players.

India are a best of 11/2 and will like the conditions they face here. Star man Kohli has a strong record in this country but others will need to pitch in too. Sharma has stuttered in this format and Yuvraj is not the player he was. As always MS Dhoni and Raina can always pare up to rescue a game. The bowling however can be suspect to the better batsmen and they have played very little t20 in the past year.

Sri Lanka are also 11/2. As with India conditions will suit them but their are some questions to ask. Sangakarra their best bat by far has looked out of touch. Both Dilshan and Jaya are retiring and have lost the eye needed for this quick format it seems. Chandimal and Matthews have been good in the middle order however which I feel is an area that will win a team a World T20. The bowling is lead by the great pace man Malinga who always bowls two good overs at the end of games in the crucial death overs. Kulasekara bowls some awkward medium pace and they have a fair armoury of spinners. Can the mystery of Mendis fool naive batters again?

Defending champions the West Indies are 7/1, they look primed for this with good wins over England in both at home and in the warm up. West Indies have good T20 bowlers, Bravo takes wickets and was one of the best in last IPL, in Narine they have one of the worlds elite spinners who will love conditions with his wrong one. Samuels top batsman in the last world cup is also proving useful with ball in hand and could be their star man. Led by Sammy this is a keen side and Gayle returns to a place he loved as part of the BPL. The ability of the tail to swing the bat means they can upset anyone as you just have to bowl them out.

South Africa are 8/1 shots for the World T20 but they are looking light on the batting side. Faf starts with a hamstring issue, while Amla will be at his best in longer formats. De Kock has talent but has been thrown in and out of the side while De Villiers has so often been asked to dig out this side. Miller was the best player in lasts years flt20 and will need show that now at international level.  The batting is soft and bar Parnell not much of the bowling department is going to threaten with the Bat.

Pakistan 9/1 shots for this World T20 are always a threat with a well rounded bowling attack and one of the best batting line ups when they show up. Hafeez acts as a good all rounder for the side usually pitching in with the bat when others fail. Shehzad is super talented and when on song of the best bats in the game.  Akmal bats well down the order scoring quickly and even old man Afridi seems to be pitching in more often than not with his bat. Pakistan have great seamers and Ajmal is a quality spinner who has plenty support too.

New Zealand at 11/1 should not be written off the World T20 format could well suit them. They have had a good year and the discovery of all rounder Corey Anderson has given them a good pinch hitter to add depth to the batting which looks strong any way. The bowling is good in the seam department when conditions suit but the spin could be said to be a bit light now Vettori is finished. No one will fancy playing them as they are a side well capable of an upset giving the big hitting capabilities of both McCallum and Taylor.

England are the outsiders of the big 8 at 18/1. Its a sign of the crisis at the moment that 18/1 isn’t even mildly tempting for most punters. KP has been pushed away their most reliable batsman in this format and Swann has also handed in his notice. Its been messy for England with decision still up on whether Ali who can bowl some spins gets into the line up. England do have some decent spin options in Treadwell and Perry but both have not had a huge amount of international experience, the seam department has been more of a let down with both Broad and Dernbach too costly at times although Jordan looks worth sticking with long term. The batting looks suspect with no one really scoring often enough. Hales copes best with spin but needs support around him.

Neither Associate should trouble the final 4 but they could both upset someone along the way.

But Dwayne Bravo has quietly being going about his business for the West Indies and could prove the value as he is proven in this format. He took 32 wickets in the last IPL and will get the similar conditions here again.

Sri Lanka look a good option given they have such a strong bowling attack but their batting leaves me uncertain should a big total arise and at 11/2 I won’t oppose but two others provide more value. New Zealand are worth a a small investment on the exchanges but my main two focus on Pakistan and West Indies. Both tick boxes of having openers that can take a game away but a middle order who can dig them out. Balanced bowling attacks will be key. Boylesports offer a refund if India win the World T20 out so the Pakistan bet has that added edge. 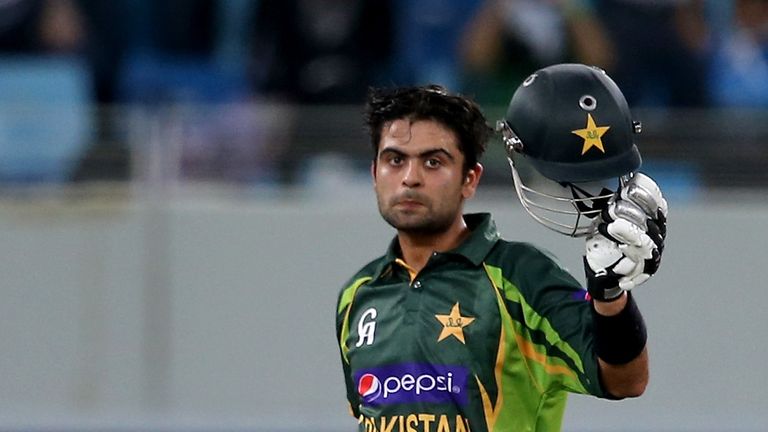 Shehzad needs to live up to a great potential

Both Aussie openers are well fancied but the spin later on in the event may find them out. I had an early investment on Gayle at 14/1 but that price is gone now and it might be silly not to look at his partner in crime Smith who has also been pretty good at times and plays good shoots. He had one duck v England but looked close to a big total scoring a 60 last time out. A real stand out price is on Pakistan opener Shehzad he has not been up to much in warm ups but scored well in the one day game with a century to suggest .his odds are too big here.

Williamson is another bat to watch when New Zealand struggled during hard times he stood up tall as a quality player. He will likely open for them now and he looked like he was still settling in for warm ups but he is a quality player when he does get going so the 50/1 can’t be left alone. With two smaller bets I am going risk Sangakarra as if Sri Lanka do well he will have picked up his level to help them do so. Most of the top players take the eye and the market knows that. But Dwayne Bravo has quietly being going about his business for the West Indies and could prove the value as he is proven in this format. He took 32 wickets in the last IPL and will get the similar conditions here again.

Second on that IPL list last year was Faulkner who took 28 wickets. He is now their main wicket taker with Mitch out of the World T2o with injury. He iss a a confidence player and if you want take 3/1 about them winning then not taking 25/1 about this lad is just silly.

Both Narine and Malinga have good IPL records, but Narine is seen as the player to just see off so often its his team mates to take advantage, Malinga is probably worth a nibble at the 12/1 on offer in some places.